Kevin Warwick, “In the Mind of the Machine” 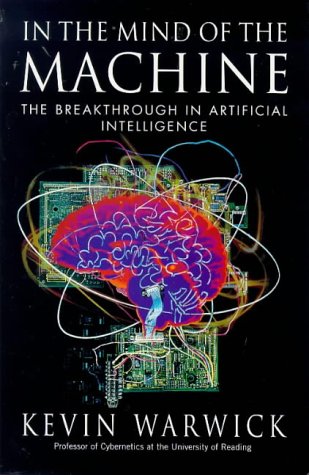 Why the new race of robots will rule the world

Professor Kevin Warwick, the world’s leading expert in cybernetics, here unveils the first robots that can learn, communicate with each other and reprogramme themselves – and warns that future generations will rule the world.

Even the most conservative estimates indicate that in the early part of the next century computational power will be greater than that of the human brain. Last year the world chess champion won a tournament against the world’s most powerful chess computer – but next year?

Advancements in robotics, particularly in optical and biological systesm are also speeding up intelligent machines’ abilities to move, operate and be effective in the everyday world. Within the next 10 to 50 years artificial intelligence systems will have been developed – not only at Kevin Warwick’s cybernetics department at Reading University, but also, for instance, in Japan. These will not only be more intelligent than humans but also exhibit a significant number of advantages; they will be faster, more reliable, quicker to learn and more robust.

The Terminator will be then a reality – not only that but a race of Terminators with the ability to communicate with each other worldwide. This book is not fictional, although it may seem so at times. Will the robots of the future treat us as we currently treat other creatures – with human farms, human pets and human zoos? This may be the best we can hope for.

Kevin Warwick refutes the sceptics, not only by questioning their assumptions and prejudices about what should be considered as intelligence and consciousness, but also by revealing what he has achieved, building robots that communicate in their own language, share experiences, teach each other lessons and behave as they wish with regard to human beings. He makes an urgent plea for an international anti-proliferation treaty if we are to stand any chance of preventing the terrifying scenarios he describes.